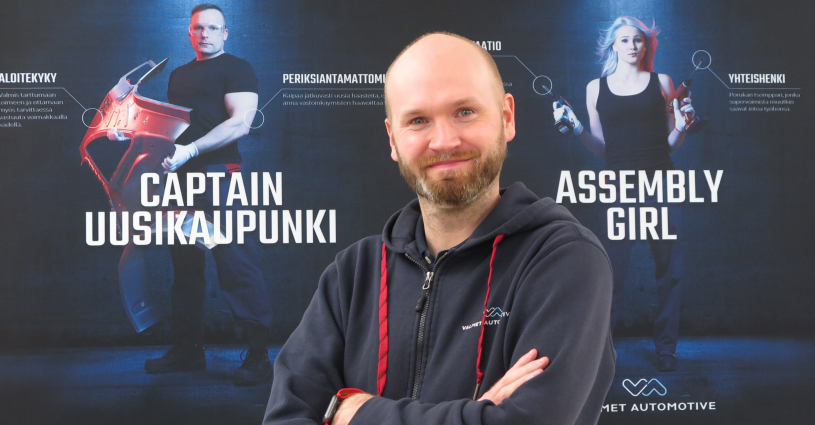 Authenticity is the key in a job application

A job application is a written opening of the game. It can get you to a job interview or sometimes even directly to a job. A job application is an important element of the job-seeking process which also involves a lot of skills that need to be practised. Telling about your own expertise and experience is not always enough. You also need to be able to look into the future and say what you can do to help solve the employer company’s challenge. This article presents the point of view of one of the fastest recruiters in Finland, Tomi Salo from Valmet Automotive. According to him, the most important thing is authenticity.

The Uusikaupunki automotive plant, or Valmet Automotive, often gets positive public attention. Sometimes the recruitment needs are incredibly extensive and quick. Headlines from a couple of years ago told how the plant canvasses for employees, and how a barber transforms into a car manufacturer in a couple weeks. When the coronavirus crisis started, the speed was still high, but the direction had reversed. The automotive industry was hit hard, when the supply chains cane to a halt, and the operating prerequisites stopped cold. The plant had to close its doors for seven weeks. It meant laying off hundreds of people. But the automotive industry is fast-moving. They are back up to speed, and the principal customer is already asking whether they could produce more.

“At the moment we are doing fine considering the circumstances”, says Tomi Salo, HR Director of the automotive plant who is in charge of recruitments.

He says that in August last year all laid off employees returned to work, and recruitments are again in progress. The plant is back on the level before the coronavirus and even beyond. The recruitment needs also increase due to the turnover of employees.

”Somebody is always coming and going. People leave to study, go to the army or elsewhere. Every month we need around 30 new employees to stay put. It’s an endless process”, Mr Salo says. At the end of 2020, a need emerged to find 400 new employees in eight weeks. It meant in practice 1,600 applications and 800 interviews, Mr Salo calculates.

So, you may well imagine that the recruiters in Uusikaupunki have routines for finding employees, and the processes are crystal clear and systematic. And it is true that the applications are electronic and streamlining had to be sought through job-seeking systems. It does not mean, however, that the selection process would ignore the human factor.

”One thing is essential”, Mr Salo starts. “There is no specific requirement for expertise. We are the only automotive plant in Finland, and we can’t assume that there would be much experience or expertise available. We train the employees by ourselves.”

People are at the heart of recruitment

Tomi Salo mentions two key factors that affect the recruitment: “We want the profile to show motivation and the ability to learn new things.”

It may sound simplified, but behind it lies a thought about the change in work. According to Mr Salo, you need to be ready to leave the past and face the future. That calls for a skill to learn new things. How can such a dimension be picked out from many applications?

”If you have worked in many different jobs, it shows that you are ready for new challenges. It’s recommended to tell openly about your diversity”, Mr Salo advises.

On the other hand, that applies more to production work. In export positions the substance issues, or expert knowledge still plays an important role. Mr Salo reminds, however, that the overall picture is decisive. But how does e.g. motivation show up in applications? Mr Salo says that it just jumps out. He would divide a good job application into two parts, the first one the CV and the second on the actual application.

”CV reflects the past and experience, while the application is directed at the future and at best tells about the applicant’s type and character. Honesty is very important in the application”, Mr Salo says.

He stresses the importance of authenticity. That’s the only foundation for long-lasting employment relationships. Mr Salo says that it involves a skill that not everybody masters naturally and that everyone should polish at some point, i.e. writing and describing of yourself.

”It’s better to try to create a neutral impression than e.g. use irony or sarcasm. They often fail to speak to the reader among a flood of applications. It’s better to say that you are unemployed and need the money.”

When applying for an expert position you should be able to write about a solution by which the applicant could solve the company’s challenge: What extra I can give and why. So, you need to understand what position you are applying for. The same applies to production jobs. In Uusikaupunki the focus is on people.

”We work in a group, work with other people and are in continuous interaction. When you understand that beforehand, you will know how to choose the right words to your application.”

Dismissals and unpaid wages particular causes of disputes at workplaces

Have you been bullied on social media?

Make use of new benefit for members: 15% off car rentals

Have a safe and responsible holiday with a rental car and utilise your benefit at −15% of Green Motion car rental in Finland. You will gain the largest benefit when you make the reservation early - so act straight away!

Social media harassment is common, but often difficult to identify

Dissing, bullying, intimidation, sexual harassment, hate speech and targeting. Did you know that more than 40% of adults have experienced harassment on social media? Publicly commenting is just the tip of the iceberg of this widespread phenomenon.

Thousands took up our challenge to build better professional well-being

As important as it is to provide support in the twists and turns of working life, professional development and job hunting, everything depends on the well-being and coping of the individual.